Damian Family Care Centers was originally established as Samaritan Health Services, in 1996, by Samaritan Village, Inc. (SVI), and a large residential and outpatient drug treatment program. Recognizing the important linkage between primary care and populations in need of substance abuse treatment, SVI had previously incorporated primary care clinics at each of its residential drug treatment facilities. These co-located health centers had been operational for approximately twenty years. 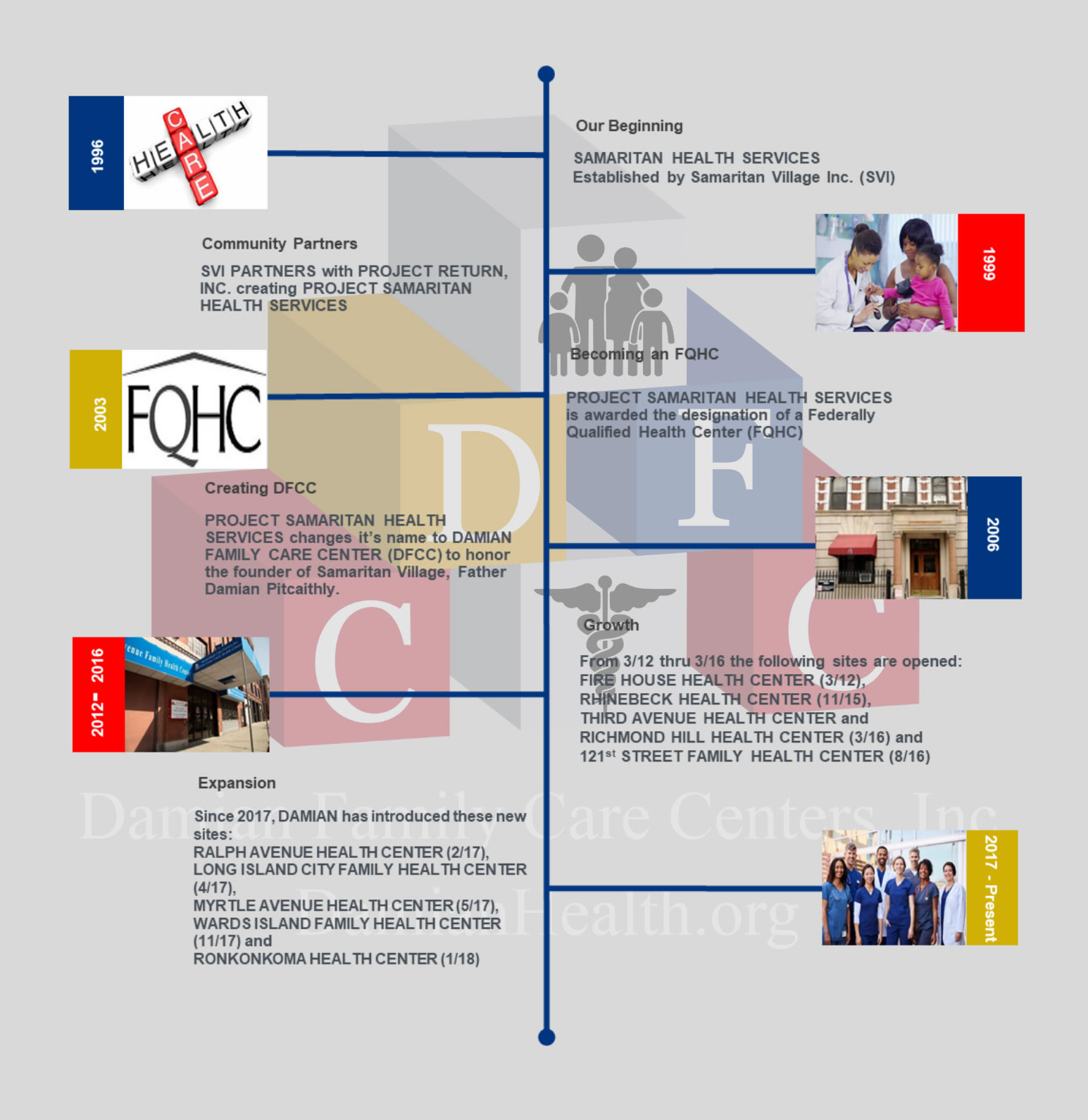 In March 2012, Damian Family Care Center opened our sixth site, the Fire House Health Center, in Jamaica, Queens,. DFCC is proud to have built this site with New York State Department of Health “Heal Queen's funding. We received this grant to construct a health center in Jamaica to replace services lost to the community due to the closure of Mary Immaculate Hospital. This site is providing services to a large pediatric and adolescent population and continues to grow new users on a daily basis.

In addition, Damian opened the Richmond Hill Health Center in Queens. This site was taken over from Samaritan Village, Inc. and is located in a building serving individuals in a Methadone to Abstinence substance abuse treatment program. This location will extend its services to individuals receiving substance abuse treatment services at the Ed Thompson Veterans Program and the community at large. In August of 2016 Damian opened 121st Street Family Health Center in Harlem, co- located within a residential drug treatment program operated by Odyssey House, Inc.

In May, Damian opens the Myrtle Avenue Family Health Center.

In November the Wards Island Family Health Center is opened.

In January of 2018 Damian opens its first health center on Long Island; the Ronkonkoma Family Health Center which is co-located within a Phoenix House drug treatment facility.

Our success at developing the systems required by the underserved in our community and particularly our targeted efforts to meet the needs of low income and homeless individuals has created significant demand for services. DFCC has witnessed an increase in our homeless since 2003. Services to our homeless patients have increased nearly 400% and accounts for 68% of our current population.

The Damian mission and our past and current actions of enhancing our model demonstrates our continuing commitment of expansion to providing care for underserved populations. We believe strongly in the partnership model and have developed a program that increases access to appropriate care, reduces health disparities and provides a broad continuum of cost-effective integrated services.